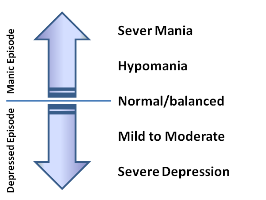 The symptoms of manic depression are quite different from other types of depression. In fact, manic depression, or Bipolar disorder, is difficult to diagnose because it affects people differently. As you can see from the picture to the left, mood swings can be quite severe ranging from severe mania to severe depression and everything in between. Some individuals are mostly manic, some are mostly depressed and others strike a balance between both.

There are 3 types of mood episodes – manic, depresseive, and mixed. Each of these episodes come with their own unique set of symptoms. Let’s take a look at each of them.

The term “mania” means excessive excitement or enthusiasm so you can appreciate how someone having a manic episode would have the following symptoms:

When a person is in a manic state they feel unstoppable and untouchable which leads to bizarre behavior, poor decisions and excessive risk taking.

The opposite of feeling manic, is feeling depressed. According to the dictionary, this means feeling sad and gloomy. However, you and I know there is much more to it! Some of the common symptoms include the following:

When someone is having a mixed episolde, it is very difficult for the person. They will go through serious mood swings in a very short period of time. They go from the an extreme “high” feeling to a huge “low” feeling. These extreme mood swings in such a short period of time can be difficult to manage. It can drive the person and those around them crazy! As a result, there is a high risk of suicide for those that spend most of their daily lives having mixed episodes.

However, if you feel that you might be depressed you can take a depression test. Also, if these symptoms of manic depression do not pertain to you, take a look at other pages on depression symptoms as follows:

A Guide to Clinical Depression Symptoms

A Review of the Physical Symptoms of Depression