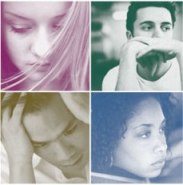 If you think you're seeing signs of teenage depression, then you need to take it seriously!  One of the biggest risks with teens and depression is that people don't recognize the signs early enough. Instead, its easily written off as typical teenage moodiness, irritability or some kind of 'phase' that they're going through.

Consider learning more about teen depression statistics and the various causes of teen depression so that you can be fully informed and spot the trouble early. Early intervention is key for depressed teenagers!

Teens are seriously prone to depression. In fact, 1 of 8 teens suffer from depression and often times leads to attempted suicide or actual suicide.  As a result, its so important to detect it early, seek a professional diagnosis then identify the best treatment to fit the situation.

Symptoms of Depression in Teens

The key to assessing the situation is to determine how often these signs of teenage depression appears. If it is for a short period of time, or even intermittent, it may just be normal teenage mood swings. However, if it is a behavior that is exhibited over a long period of time – longer than 2 weeks - then it may likely be teenage depression. I which case, these symptoms should be discussed with your family physician and/or a mental health professional.

It's important to note that this is different that that of adult depression in that teens are more prone to violence, are much more irritable and tend to develop physical ailments that can't be explained. With adults, there is less tendency towards violence, they usually feel more sad than irritable and they don't normally exhibit hypochondriac symptoms.